Mike was diagnosed with Celiac Disease in high school and began baking gluten-free breads at home with his mom in 2004. He moved from Pennsylvania to DC in 2011. He found the options for fresh baked gluten-free items in the DC area lacking, which inspired him to open Rise Bakery in 2014. He is passionate about making gluten-free life in the DC area more delicious and accessible for the Celiac community. His favorite things about working in a bakery are chatting with regulars, meeting new customers and night baking. He spends his free time with his wife and son and their dog and cat. He is a mediocre athlete who finished in third place in the district finals in the 400 meter dash in 5th grade.

La’Prea was born and raised and in Maryland. She first learned to bake with her Grandma, and has been doing it ever since. In culinary school she was the type of student who trusted her instincts and wasn’t afraid to play around with the recipe. La’Prea thinks people should use logic rather than emotions more often. She brought these skills to Rise, beggining in the kitchen, and is currently the General Manager.

Veronica (Back of House)

Veronica grew up in San Vincente, El Salvador, and has been working in food service for the last 16 years. Her answer to “What do you do for fun?” is “Work”. She has a daughter who is her favorite person in the world. At Rise she keeps the kitchen going, prepping food and baked goods, cleaning everything, and helping customers.

Matthew hails from Greeneville, North Carolina and relocated to DC for a digital marketing gig. He started as a customer and has infilitrated the team for the discounts. In his free time he is either running, watching Real Housewives, or doing the Monday crossword (only the Monday one).

Tyler (Back of House) 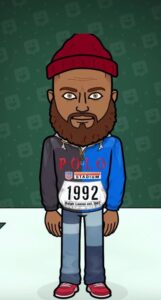 Tyler was born and raised in Washington, DC. Standing at 6 ft tall, he is both a Scorpio and a business entrepreneur, running his own catering company (@trapmelanineats) as well as a mobile convenience store. On top of these endeavors he works at Rise in the kitchen, prepping pastries and working the line. He likes to spend his free time taking road trips, tasting and making new foods, and having a good nap.

Coming soon once she writes her bio =)

Hunter is originally from Orlando Florida. Hunter’s food service journey began as a wizard selling butterbeer at Disney Land, and has culminated in working Front of House at Rise while also serving as a clerk to the courts. Free time activities include cooking, baking, dungeons and dragons, and general shenanigans.